Change the circumstances, or find alternatives?

Contribute to the Ajax Foundation. Work towards a safe and pleasant neighbourhood, minimizing the impact of the traffic. Share our knowledge internationally. And support initiatives that contribute to a strong economy. This is what drives our approach to social responsibility.

In the past year 34% of our visitors used public transport to get to the ArenA, an increase of 1% compared to the previous year. In the same period, 300,000 people used the ArenA Mobility Portal (compared to 180,000 in 2011-2012). Focus on traffic management in the immediate surroundings of the ArenA has increased since the Ministry of Infrastructure and Environment selected the area as a testing ground for the programme ‘Beter Benutten’ (making better use of). We are also currently making plans with Taxi Electric Amsterdam to have only electric taxi transport to and from the ArenA.

Every year, approximately two million people find their way to an event, meeting or guided tour in the ArenA. Guiding this flow of people to the stadium efficiently and sustainably, poses a huge logistical challenge. “You have to deal with factors beyond your control, like maintenance on the railways,” explains Marco Gerrese, ArenA Manager of Public Affairs. In these situations, how do you efficiently communicate the ‘next best option’ to your visitors?

The ArenA is continuously searching for the ideal mix of transport for visitors to use when coming to the ArenA. Travelling in groups is most sustainable. “If it were up to us, all visitors would come by train,” says Gerrese. “We promote public transport to our visitors, through the Mobility Portal and printed messages on concert tickets. But travelling by bus or carpooling is also preferable to everybody travelling in their own car.”

Searching for the Best Route

Many visitors seek advice about the best travel option. This is confirmed by the number of visitors who use the Mobility Portal, launched by the ArenA in 2012. Gerrese: “In the past year 300 000 visitors used the portal, nearly twice as many as the year before. The fact that visitors stay on the site for 2.5 minutes on average indicates that they really are searching for the best route to the ArenA.” The Mobility Portal also gives a CO2 advice for each travel option and provides visitors with an easy way to determine their most sustainable route to the ArenA.

Go for the ‘next best option’

In reality, the most sustainable route is not always available. This was the case during extensive maintenance on the railroad between Utrecht and Den Bosch in May 2013. “Many visitors to the ‘Toppers’ concerts that took place in May 2013, came from the provinces Brabant and Limburg. We were forced to give these people a ‘negative travel advice’ for public transport in this time-period. A message that contradicted the printed text on their access tickets,” says Gerrese. “To inform all these visitors on time about the ‘next best option’ we rolled out a large scale communication campaign.” Using direct marketing, Twitter, Facebook, the Mobility Portal and the website of the event organiser, the ArenA managed to arrange for thousands of visitors to travel to the stadium by bus.

Consistent Information from All Parties

“We have become proficient in communicating effectively with our visitors,” says Gerrese. “Not just through our own channels, but especially in cooperation with other involved parties: from the event organiser to the railways, touring bus companies and businesses in the area like offices and restaurants. We communicate as broadly as possible, and ensure that all channels provide consistent information to our visitors, creating an awareness of accessibility options.” 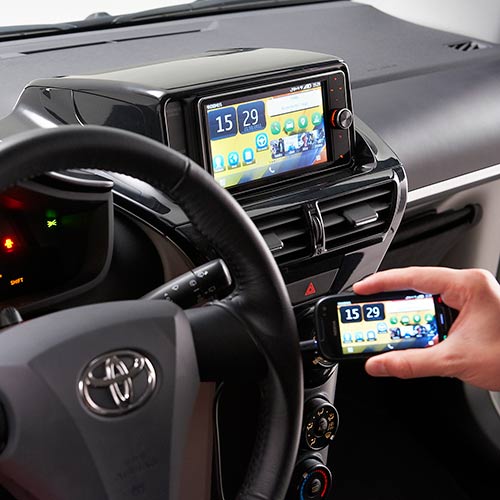 The Ministry of Infrastructure and Environment chose the ArenAPoort as a testing ground for In-Car technology. A specially developed app, which allows drivers to choose the best route by using real time traffic information. As part of the ‘Beter Benutten’ programme, the app will be used in a number of pilot projects in the coming year. This should improve traffic flow in the immediate surroundings of the ArenA.

This development contributes to a safe and accessible environment. During the pilot, which will start in the spring of 2014, the Amsterdam ArenA will act as a facilitator. Eventually, the ArenA hopes to use the app to familiarize visitors with the area, to the benefit of businesses and restaurants in the area. 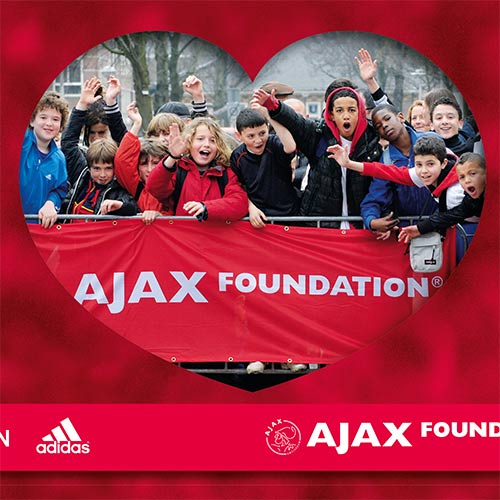 Amsterdam ArenA and the Ajax Foundation

For the ArenA, sustainability also means being a good neighbour and contributing positively to the area. Which is why the ArenA supports the Ajax Foundation. The Ajax Foundation organises local and international projects involving sport and health, social integration and education.

One of the Foundation’s projects is Ajax StreetWise. A programme, developed to bring primary school children in the Amsterdam area into contact with Ajax and football in a socially responsible manner. The theme is ‘Learning together, playing football together’. In the past year, Ajax players held clinics in Haarlem, Almere, Hoofddorp and Amsterdam. Ajax StreetWise was developed in cooperation with their sponsor AEGON.

In December 2012, Ajax players and technical staff made their annual visit to VUmc Kinderstad, the children’s facility of the University Medical Centre Amsterdam. The visit is an annual event, originating from the partnership between Ajax and the Amsterdam-based hospital since 1998. The players bring gifts, pose for photographs with the young patients and play – when possible – a game of football with them in the Ajax Players Home.

Amsterdam ArenA is the home of football club Ajax. So working together on corporate social responsibility and sustainability makes sense. “We have agreed that Ajax, also on behalf of the ArenA, focuses on the social aspect. The P for People. In turn, we focus on building related sustainability issues. The P for Planet”, says Henk van Raan of the ArenA. “This cooperation makes us stronger and improves our ability to get successful results.” 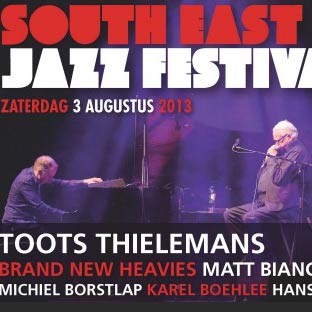 Involvement Beyond the Stadium Walls

The ArenA’s sustainability objectives reach beyond saving energy, recycling grass and adopting a windmill. Corporate Social Responsibility is a key aspect of our sustainability policy. For this reason, we support local and international initiatives increasing social involvement.

The Triple A Foundation – a partnership between AFC Ajax and Amsterdam ArenA – gives people the training required to work as a football steward. The foundation has a pool of over 700 people, of whom at least 40% live in the direct vicinity of the ArenA. “We also work with the Employer’s Service Point Amsterdam Southeast to recruit people who are finding it difficult to access the labour market,” says Karin den Iseger, Manager of Triple A. “This way the ArenA acts as a socially engaged employer. Not only inside, but also outside the stadium walls.”

The extensive experience the Triple A Foundation has gained over the past 17 years by training local people, is also of great value outside the Netherlands. Den Iseger: “We offer 150 disadvantaged youngsters in Natal (Brazil) an opportunity to participate in a training programme for stewards. We work with Arena das Dunas, OAS Arenas, Plan Brazil / Plan Netherlands, ArenA do Brasil, AkzoNobel, Voluntary Service Overseas (VSO) and Randstad. Plan Brazil is responsible for recruitment and coordinating the project; Amsterdam ArenA and ArenA do Brasil provide training and coordinate the operational process.”

Life after the World Cup

The trained Brazilian stewards are employed by the stadium. “They will not only work during World Cup matches, but also during future events. Their training certifies them to become proper stadium stewards,” according to Den Iseger.

In 2013 the ArenA also made a cultural contribution to the greater Amsterdam South East, by hosting the South East Jazz-festival. The new main building provided a venue for over fifteen musical acts that attracted 2,500 visitors. One of the stages offered local musicians an opportunity to play with well-known artists. This way the ArenA facilitated a high quality event by the residents, for the residents of Amsterdam South East. 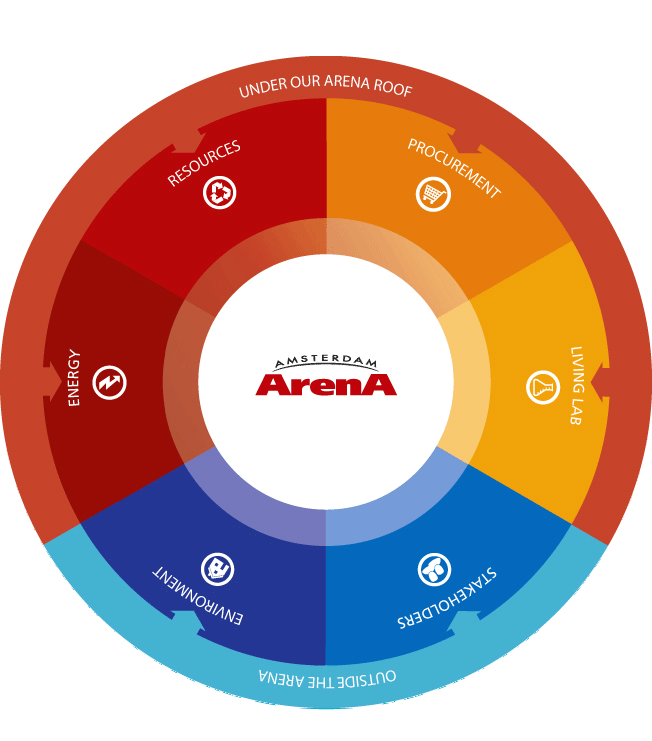